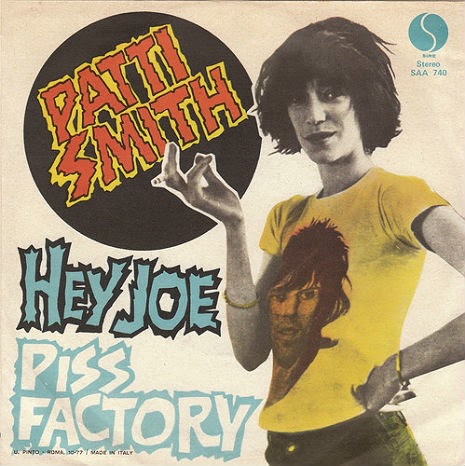 On June 5, 1974 Patti Smith recorded her first single--also often called the first "punk" single, "Hey Joe" b/w "Piss Factory", at Electric Ladyland Studios in New York City. "Piss Factory" is a spoke word piece that recalls an incident at a South Jersey toy factory where fellow workers shoved her head in a toilet bowl full of piss because she was working too fast. On the A side Patti addresses the other famous Patricia of the 1970's: Patty Hearst, the kidnap victim turned bank robber. 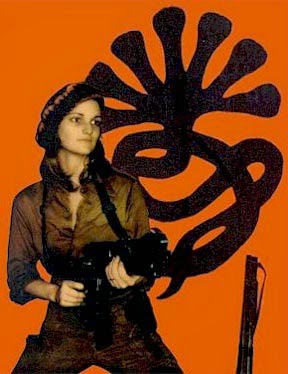 Patty Hearst, you're standing there in front of the Symbionese Liberation Army flag with your legs spread, I was wondering were you gettin' it every night from a black revolutionary man?

Before Patti Smith ever entered Electric Ladyland she had already made a mark on rock history, contributing songwriting to several Blue Oyster Cult songs ( and vocals on "The Revenge of Vera Gemini" ) as well as a spoken word piece on Ray Manzarek's "If I Wake Up Dreaming".


The first time her name pops up in the Rolling Stone archives it's for a review she wrote for Todd Rundgren's The Ballad of Todd Rundgren.

About a hundred years ago the runt of the Sioux tribe breathed his vision on his tribe. They dropped that runt crap and crowned him Crazy Horse. I think it's time 'runt' be dropped from Todd Rundgren
at 2:00 AM