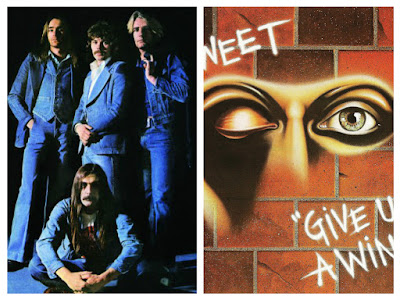 March 1976 was quite the month for releases from the British light heavyweights. Of the new batch of Slade, Status Quo and Sweet albums, my money's on Blue For You. It features both the hit "Rain" and the fan favorite "Mystery Song" which has the slow build of a great Feelies tune before taking off like a boogie-fueled rocket ship. Brilliant! Is it too late to enlist in the Quo Army?

Sweet: Lies in Your Eyes

In contrast, the new Sweet single is a freakish ear worm. The follow-up album to Desolation Boulevard has some hard rocking bubblegum including last year's classic single "Action". I need to give it a few more listens obviously.

Labels: Blue For You, Lies in Your Eyes, Mystery Somg, Status Quo, Sweet