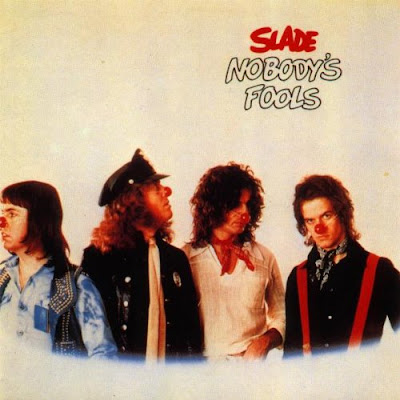 "The album is why we went to the States, not for tax reasons, folks! We wanted to get fresh ideas, we felt we were getting a bit stale living in England."
-Noddy Holder to Slade Fan Club Newsletter


On March 5,1976 Slade released Nobody's Fools, an album recorded in America with -gasp!-back up singers. With hopes of a Beatles-like breakthrough, Noddy and the boys had spent the past year in the USA touring with bands like Aerosmith, Black Sabbath and ZZ Top where they developed a love for country and soul music.

Apparently the band also learned how to spell.

Despite two #11 hits ( the Beatlesque "In For a Penny" and the glam rocker "Let's Call it Quits") it all added up to just enough of a deviation from their sound for some long time fans to call Slade "sell-outs" and the band never recovered until nostalgia fueled a revival in the UK in the 1980s.