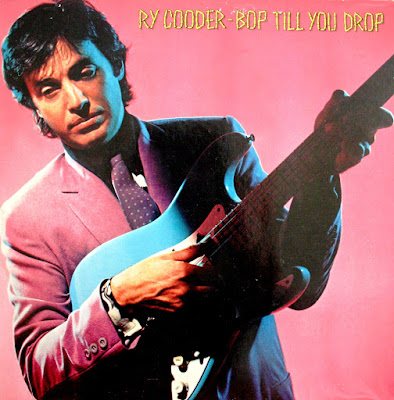 In July of 1979 Ry Cooder released Bop Til You Drop, alleged to be the world's first digital rock album and one of the year's critical favorites. The album finished #23 on the Village Voice's Pazz and Jop Critics Poll ,  #15 on the NME end of year list, #16 on the Sounds list,  #2 on the Melody Maker round up, just behind Fear of Music and #1 on the OOR critics list.

After a series of album Cooder felt were too quirky, this collection of mostly covers offered a different approach. "The style of song is well suited to my weird voice," he told Rolling Stone. "The idea is to blend warm vocal arrangements and the guitar sound so that one leans on the other."

Cooder might be the last artist you'd want to enter the digital recording era. His rootsy albums, like Into the Purple Valley and Paradise and Lunch, really have a life within the grooves. This album always struck me as sterile in comparison. It's not what I come back  to with any frequency.