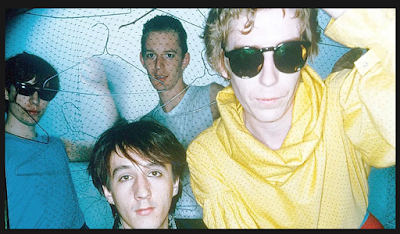 The Psychedelic Furs : Imitation of Christ

On July 25, 1979 radio listeners heard The Psychedelic Furs in a Peel Session recorded nine months before they would release their debut album. All four songs they played would wind up on the album, including "Imitation of Christ", "Sister Europe" and their first single "We Love You". Peel explains that he invited the band after listening to 491 demo tapes over a weekend. He must have been taken by the band's ability to merge the Velvets, Bowie and Roxy influences into one brand new sound. The version of "Imitation of Christ" here is especially good, sounding better than the one Steve Lillywhite produced, and with old lyrics about a guy who dances in a bar. The Furs weren't playing gigs at the time of the radio performance because they had lost a drummer. Peel put out a call for a new drummer. Vince Ely would soon save the day.