Since the River Took Emmy Lou 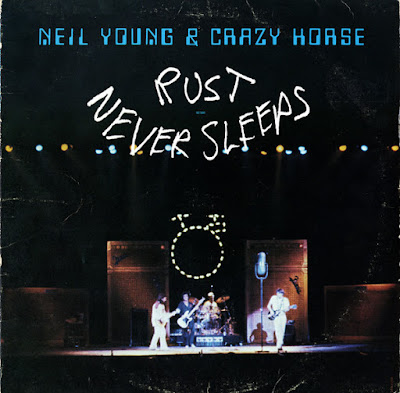 In July of 1979 Neil Young and Crazy Horse released Rust Never Sleeps, a concert film and, strangely, a live album with most of the audience sounds removed. The band had reunited and spent much of 1978 on tour, working up some new songs like  the acoustic "Hey Hey, My My (Into the Black)," the electric "Powderfinger" and the neo-grunge sounding "Sedan Delivery."  The album follows the dreary, return to Harvest-sound-alike Comes A Time, an album Young could no longer enjoy playing. Here, on Side Two at least, his feet and frets are firmly planted in rock + roll.

"I’ve got a job to do,” Young told Rolling Stone's Cameron Crowe. “The Eighties are here. I’ve got to just tear down whatever has happened to me and build something new. You can only have it for so long before you don’t have it anymore. You become an old-timer . . . which . . . I could be . . I don’t know.

“After all, it’s just me and Frank Sinatra left on Reprise Records.”

I've always been a bit torn about "My My, Hey Hey (Out Of the Blue)", because it's not the story of Johnny Rotten, is it? The Sex Pistols had burned out, performing their last concert in San Francisco in January of 1978.  But it was Sid Vicious who had died earlier in this year. So Neil couldn't find a rhyme for Vicious? Superstitious? Suspicious? Ambitious? Golden Delicious? I'm probably way off because I haven't seen anyone else question the lyrics.

Sadly, Kurt Cobain would quote the song in his suicide note. "I don't have the passion anymore, and so remember, it's better to burn out than to fade away."

Rust Never Sleeps finished #2 on the Village Voice's Pazz + Jop critics poll, behind Graham Parker's Squeezing Out Sparks and buoyed by the magazine nominating Young as "Artist of the Decade". The album received a rare grade of A+ from the dean of rock critics, Robert Christgau who wrote :

For the decade's greatest rock and roller to come out with his greatest album in 1979 is no miracle in itself -- the Stones made Exile as grizzled veterans. The miracle is that Young doesn't sound much more grizzled now than he already did in 1969; he's wiser but not wearier, victor so far over the slow burnout his title warns of. The album's music, like its aura of space-age primitivism, seems familiar, but while the melodies work because they're as simple and fresh as his melodies have always been, the offhand complexity of the lyrics is unprecedented in Young's work: "Pocahantas" makes "Cortez the Killer" seem like a tract, "Sedan Delivery" turns "Tonight's the Night" on its head, and the Johnny Rotten tribute apotheosizes rock-and-roll-is-here-to-stay. Inspirational Bumper Sticker: "Welfare mothers make better lovers."

Rolling Stone's Paul Nelson was also a big fan of the album, writing:

For anyone still passionately in love with rock +roll, Neil Young has made a record that defines the territory. Defines it, expands it, explodes it. Burns it to the ground.
at 4:59 PM