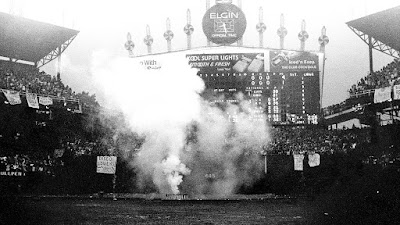 On July 12, 1979 the second game of a double header at Chicago's Comiskey Park was canceled after an anti-disco promotional event dubbed Disco Demolition Night got out of hand. The brainchild of local DJ Steve Dahl, the demonstration was supposed to consist of blowing up some disco records on the field between games.

The White Sox hoped the event would increase attendance that night.The game actually did sell out  but thousands of  fans showed up without tickets to voice their hatred of disco. Many stormed the gates and filled the ballpark way beyond capacity, setting up a dangerous situation when Dahl blew up the disco records. Fans threw firecrackers and bottles onto the field, eventually rushing the field, starting fires and battling with police. You can re-live the night below.

Even notable rock bands were recording disco songs . Also on the charts were Kiss's "I Was Made for Lovin You"and  Electric Light Orchestra's "Shine a Little Light". Blondie, Rod Stewart and the Doobie Brothers all had chart topping hits that were disco friendly.

Some saw the demonstrations as racist and gay-bashing.“It felt to us like Nazi book-burning,” Chic’s Nile Rodgers once said. “This is America, the home of jazz and rock and people were now afraid even to say the word ‘disco.'”
at 2:00 AM