Menopause Wives Are Hard to Handle 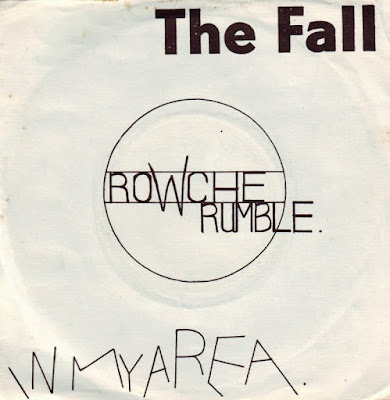 In July of 1979 (more likely in October) , The Fall released "Rowche Rumble", an updated version of "Mother's Little Helper" that scored the band a #21 on NME's year end list of the best songs of 1979. The myth behind the song is that Mark E Smith worked for the Roche pharmaceutical company and, thanks to a clerical error, he wound up with a huge unwanted delivery of barbiturates that he hid all over Manchester.  Smith never mentions this in his memoir Renegade : The Lives and Tales of Mark E Smith so I can't vouch for it.

The lyrics concern the Swiss company's distribution of valium all over the world:

Loads of wives around the world
Are given them by doctors, who think they're little girls
The doctors need prescriptions
The wives need their pills
So Rowche Rumble

In his review of the single for Smash Hits, XTC's Andy Partridge wrote:

What a starter--I wonder what made my hand land on this one? Sounds like the cover, cheap biro lines, bad relationships. Is this the theme of the medication? Great chemist's organ sound. Not one for young girls to make zips or brassieres mindlessly to on the factory floor. Good sound, bad song (down with pills). B side "In My Area" suffocating ill music, felt like I had flu, blanket over my head.