She Drove a Plymouth Satellite 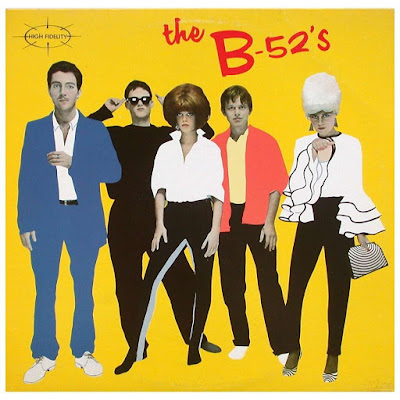 On July 6, 1979 The B-52's released their self titled debut album, recorded at Compass Point Studios in in Nassau, Bahamas with Island founder Chris Blackwell producing. NME visited the recording session and relates a mixing session for "Lava"  in an a June 9, 1979 article:

"Are you all sure you're happy with that?" Blackwell scrutinizes the faces gathered in the air-conditioned, hermetically sealed studio control room. A studio, to the layman, is like a hotel bedroom: once inside you could be anywhere. The B-52's glance anxiously at each other..."Because if you aren't happy, now is the time to speak up. Once the record is made, it'll be too late. That's it. It will always be The B-52's first album."

Kate, who take the most diligent interest in the protracted and distracting mixing process, pipes up first: "Do you think you could push Cindy's voice up a little at the end? When she slide up the register on the  'red hot lava' harmony...the effect is kinda lost."

Keith also applied himself, ensuring that none of the group's tightness is submerged. He wants to hear the guitar brought up a little. Or something.

I remember the first time I heard the album. A friend played side one for me in his room and I was immediately struck by how fresh, fun and quirky it sounded. The album begins with the single "Planet Claire", which struck me as surf rock from outer space. It's followed by "52 Girls", which has one of the great drumming performances of the year. Then "Dance This Mess Around" where Kate sings at the top of her voice "WHY DON'T YOU DANCE WITH ME?? I'M NOT NO LIMBURGER!!"  By the time the side ends with the epic"Rock Lobster", I knew I needed my own copy of the album

A lot of people felt the same way. The album has gone platinum in both the United States and Australia 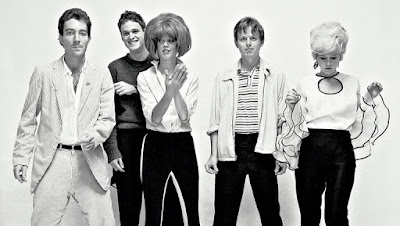 Most critics were fans as well. The album ranked #7 in the Pazz and Jop Critic's Poll. Robert Christgau gave the album an A, writing:

Fond as I am of the pop junk they recycle -- with love and panache, like the closet ecologists they are -- there's something parochially suburban about turning it into the language of a world view. So I'm more delighted with their rhythms, which show off their Georgia roots by adapting the innovations of early funk (a decade late, just like the Stones and Chicago blues) to an endlessly danceable forcebeat format. Also delightful is their commitment to sexual integration -- Cindy Wilson is singing more and more, although her voice occasionally gives out before her ambitions do. Major worry: only one of the copyright 1979 songs -- my favorite track, "Dance This Mess Around" -- is as amazing as the 1978 stuff.

Some, like Red Starr of Smash Hits,  found the joke wearing thin:

After all the fuss, this is a real disappointment. The American girls chant jokey lyrics over a pipe organ and sledgehammer drumming in songs that sounds like accidents. Quirkily amusing at first but gets very tiresome very quickly. More style (hairstyle mostly) than content

Hearing "Rock Lobster" in a disco is said to have motivated John Lennon to come out of retirement and begin recording again.

“I said, ‘That’s Yoko!,’” Lennon recalled that fall in an interview with the BBC. “I thought there were two records going at once or something. Because it was so her. I mean, this person had studied her. I thought, ‘Get out the ax and call the wife!’ I called her and I said, ‘You won’t believe this, but I was in a disco and there was somebody doing your voice. This time, they’re ready for us!”