These Are The Good Times 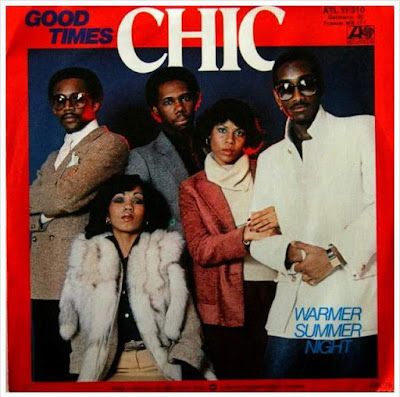 In July of 1979, Chic's "Good Times" skyrocketed up the American and U.K.charts where it would peak at #1 and #5 respectively. What the record buying and disco dancing public probably never guessed is that the grooviest tune of the summer was a protest song. Nile Rodgers broke it down in an interview at Seattle's Experience Music Project ( now MoPop):

At the time that we wrote Good Times, the country was undergoing the worst economic depression that it's seen like the since the Great Depression, which is what they used to say, and people were furious with us for writing a song Good Times. And we used to look at people, and we were befuddled, and we went, What are you talking about? And we realized that we had done our job so effectively that all of our lyrics were shrouded in double-entendre because there was no way that I was ever just gonna write a song about partying and dancing. I mean, I'm a Black Panther, what are you talking about? And so it was always about compromise.

So when we wrote Good Times, what did we do? We went back to the Great Depression. Here's Good Times, the lyrics are [sings from "Good Times"], "Happy days are here again," which is directly [sings "Happy Days" from 1930s]: "Happy days are here again, the sky's na-na, let's get together, how about a quarter to ten? The stars are gonna twinkle and shine this evening about a quarter to nine."


I mean, this was all seriously thought-out stuff. We didn't just randomly write this. This was protest shrouded in double-entendre. I mean it was all of this stuff that had, as Bernard and I used to call it, DHM: deep hidden meaning.
If the song didn't have any DHM, we weren't putting it out! We, we would work on a song until it had a sufficient amount of DHM, and then we were cool with it.