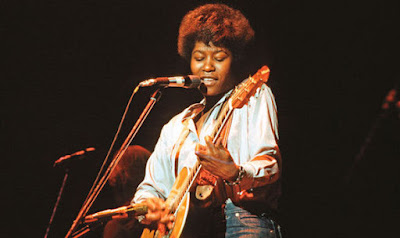 Joan Armatrading : Down to Zero

On July 29, 1976 Joan Armatrading gave lucky BBC Radio 1 listeners a preview of her upcoming self-titled album on the John Peel show. It may be surprising that she did not perform "Love and Affection", which would be her breakout hit. As for the album itself, Joan Armatrading would top Sounds Magazine's poll for best album of the year.

It was 1976 and Armatrading often used gender neutral language in her love songs ( though she drops several "he"s in "Water With the Wine").

When I saw her perform at the Saenger Theatre in New Orleans around 1984-1985, I stood in a hall full of women swaying with arms outstretched and singing along as Armatrading sang the crowd favorite "Willow".

Armatrading is now 65 and married to her partner and although she has retired from touring, she is still recording.  And still quite private about her own life as she recently told the Independent:

This is how I've always been. It's not something that I learned to do once people started to know my name. To me, it's good to have some privacy. I always ask people, and I will ask you, if you have 10 friends, do you tell each of those 10 friends exactly the same information about yourself? Do you?

Labels: 1976, Down to Zero, Joan Armatrading