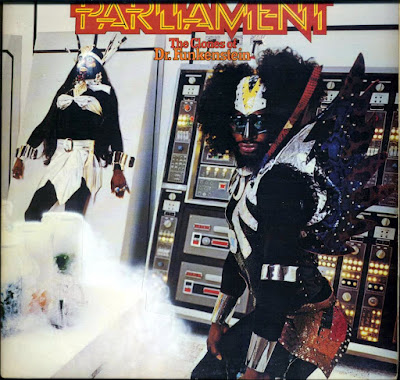 Parliament : Do That Stuff

On June 20, 1976 Parliament's "Tear the Roof Off the Sucker" was still climbing the US charts on its way to #15 when George "Dr. Funkenstein" Clinton and his  band released the follow-up to their epic Mothership Connection.  The Clones of Dr. Funkenstein has more of that funky stuff. This time things get brassy thanks to a dynamic horn section made up of Maceo Parker, Fred Wesley, The Brecker Brothers and Rick Gardner. I suppose there is a concept to this album, what with Dr Funkenstein cooking up a batch of clones to spread funk throughout the solar system, but your hips may be moving too much to pay attention.  The late Bernie Worrell also performs on this album. Clones  may not measure up to the Mothership...but is certainly worth the connection.

Labels: 1976, Do That Stuff, George Clinton, Parliament, The Clones of Dr. Funkenstein