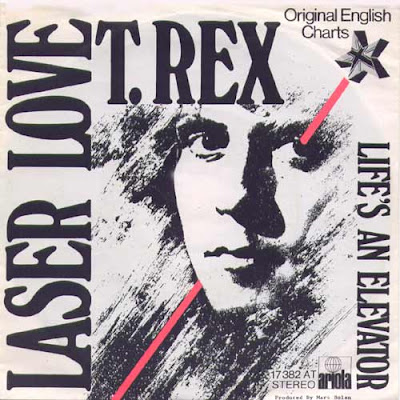 On July 13, 1976 T.Rex performed a live version of the Futuristic Dragon cut "Laser Love" for an ITV broadcast that aired at the end of August. This is the same week his last Top 20 UK hit, "I Love to Boogie", was peaking at UK#13.
As Dylan White, the fan who uploaded the video to YouTube, noted:

What is first striking is that Marc, who having achieved so much already was still only 28. He has his hair cut short and is wearing a white short sleeved jacket with a black T-shirt and a tie, in exactly the same style as worn by The New York Dolls, Television, Talking Heads, Blondie, Elvis Costello, Tom Robinson etc. in the following year 1977!