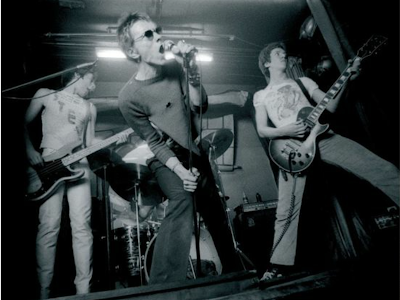 On July 20, 1976 the Sex Pistols introduced a new song to the crowd in a Manchester club. It was called "Anarchy in the UK" and it may be the greatest single song of the punk era.  Future Joy Division members Peter Hook and Bernard Sumner were there and the next day Hook bought a bass. Steve Diggle of the Buzzcocks was there and he says the gig inspired the band to record their Spiral Scratch EP.

In his memoir, Anger is an Energy, John Lydon explains the lyrics of "Anarchy in the UK" in depth:

With those opening lines, 'I am an antichrist/I am an anarchist", I wasn't trying to set myself up as some kind of bogeyman. I never thought of that at all. No, no, no, somewhere deep inside me, I was thinking I'd be seen as the victim of all of this, and great sympathy and outpourings of love and joy would be bestowed upon me! Honest! I had no concept of being the naughty bugger. It wasn't about that, and to my mind it certainly wasn't just about me. It was about us. We're being given an opportunity here -lets tell it like it really is, shall we?

Of course, everyone around the band at the time was saying, "Why don't you write a love song? Why don't you just write a hit single?" It'll be great then, everyone'll love you!""What, don't they already? Oh." To this day that's all I keep hearing from the business end and its utter nonsense they're talking...

But no, I wasn't an anarchist. I found that he written word could achieve far greater disturbance than planting a bomb in a supermarket. The written word's a powerful thing and I don't think that was too well considered, at least not in pop music, until I started to wrote that way. Theres no personal spite or viciousness in what I'm writing. It's absolutely about demanding a clarity from politicians . As long as I know what's what, and what it is you're expecting of me, and what it is I'm expecting of you, everything's fine. I will not be anyone's cannon fodder. If it's not a worthy cause, I'm with the opposition.