4 Songs with Roger Fisher from Heart 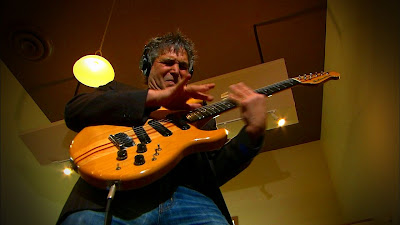 To celebrate Heart's induction into the Rock and Roll Hall of Fame, 1001Songs asked guitarist Roger Fisher to talk about four of the band's best known songs: "Crazy On You","Magic Man", "Barracuda" and "Mistral Wind". Tonight Roger and the other original members of Heart will join Ann and Nancy Wilson onstage for the first time in more than 30 years to perform "Crazy On You" so let's start with that one.

Mistral Wind ( from Dog and Butterfly, 1978) a fan favorite

Roger Fisher
Back when I was still in Heart and Van Halen was in town me and Eddie were in the dressing room playing stuff and he said "Show me how to play those lines in "Mistral Wind" and I showed him and he couldn't play them! Immediately. Of course Eddie Van Halen is a monster and in a few minutes he'd have it down but there was that little moment of satisfaction when even Eddie Van Halen couldn't play my guitar lick!

Roger Fisher
When we were recording "Barracuda" at Kaye-Smith Studios in Seattle ,we were under the gun to get this album out as quickly as possible because of the legal situation we were in (Heart broke its contract with Mushroom and signed a contract with CBS subsidiary Portrait Records, resulting in a prolonged legal battle . Mushroom released the partly completed Magazine in early 1977, just before Portrait released Little Queen. Both sides attempted to prevent the other from releasing any Heart music). But when it came to "Barracuda" we were doing take after take after take because we were fine tuning it. This felt like a hit song and we wanted to do it right and man! we just kept doing it over and over . And you don't want to do that normally because the first 2 or 3 times you perform  a song is when you feel it the most but after that it doesn't have the same feeling. But "Barracuda" MAN! By the time we recorded the keeper track it was like this big train running through the room that was so powerful and so in sync with itself. My God! What a force to be reckoned with!


Roger Fisher
At the end of "Magic Man" where I really take off, there are guitar licks there that are not easy to play. It's comical. Because, you know, I'll sit in with a Heart tribute band. And these guitar players are really good but nobody can play these lines! And of course that's Howard Leese, who was responsible for a lot of the harmony solos in many of the songs, playing the Moog synthesizer. One of the first ones that ever came out.
at 2:00 AM