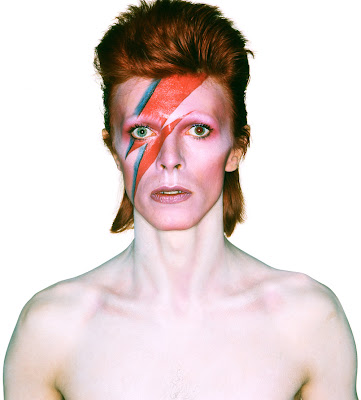 More urgent and far more challenging than its predecessor, Aladdin Sane (released April 13, 1973) explores stardom from the inside. Many of the songs were written during Bowie's 1972 tour ( "Time" in New Orleans; "Drive-In Saturday" between Seattle and Phoenix) which is why it's been called the American Ziggy Stardust.

Note: Bowie supposedly shaved his eyebrows when Mott the Hoople turned down "Drive In Saturday"

What kind of debauchery did David Bowie witness in America? The album oozes with sex ("Cracked Actor", "Drive In Saturday") violence ("Panic in Detroit") and rock and roll ("Watch That Man"). Mick Ronson's guitar is often higher in the mix than Bowie's voice but it's free form pianist Mike Garson who steals the show with his freaked out solos on the title cut ( starts 2:00 in).

Bowie has been accused of , to put it kindly, borrowing ideas from other artists. "Panic in Detroit" has a Bo Diddley beat. " The Jean Genie" sounds like the Yardbirds doing Diddley. And there's the final cut, the fan favorite "Lady Grinning Soul".

Some say it sounds an awful lot like the Quincy Jones track "On Days Like These" , featured in the 1969 film The Italian Job. I don't really hear it. Can you?

I'll let Bowie off on this one. The cover of "Let's Spend the Night Together" ,however, is an appalling preview of the covers album Pin Ups that would come out in October.