40 Year Itch: Your Mouth Is Driving Me Mad 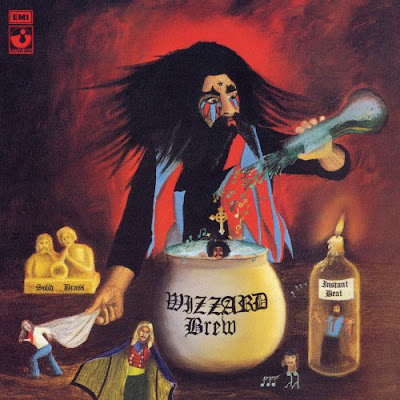 With the short-lived Wizzard, Move and Electric Light Orchestra co-founder Roy Wood had an amazing run of UK singles in 1973 beginning with the Top 10 "Ball Park Incident" in January, and two #1 hits "See My Baby Jive" ( peaking for four weeks in May) and "Angel Fingers" (in September) before rounding out the year with the perennial hit "I Wish It Could Be Christmas Everyday". You could hardly escape the vision of this wild man in his star child makeup.( Nor could we in America, when Kiss adopted his look).

Here's where things get weird. Not one of these singles appear on the original album Wizzard Brew ( though all appear on CD releases). This is a strange and inconsistent concoction, as the album's own liner notes make clear:

In this group there might be cellos and such, but never would they give forth the sound of a chamber music quartet. This group was to be coarse, loud, and unruly,  and it would never lose sight of its dedication to primal rock n roll. Yet it would still be experimental because Roy Wood was a man of many ideas.


All of those ideas come to strange fruition on Wizzard's 13 and a half minute  "Meet Me at the Jailhouse". Ornette Coleman, eat your heart out.

Wood would become a bit of a recluse by the mid 70's but he had one more gift for music lovers of 1973: the extraordinary solo album Boulders, about which we'll write in August.
at 2:00 AM