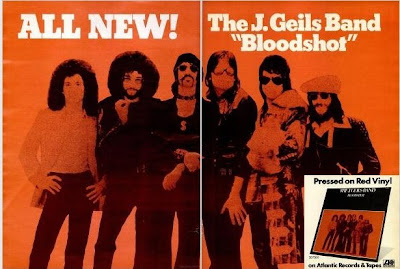 Now don't touch the knobs now, we're going to have some fun around here
-Peter Wolf

With Bloodshot, a potpourri of blues, boogie and the reggae influenced #30 hit "Give It To Me", Boston's  J. Geils Band enjoyed their first and only Top Ten album until Freeze Frame went multi-platinum in 1982. Years of touring had helped turn J Geils into the ultimate American house party band.

True fans can boast of owning the original red vinyl pressing of the album.