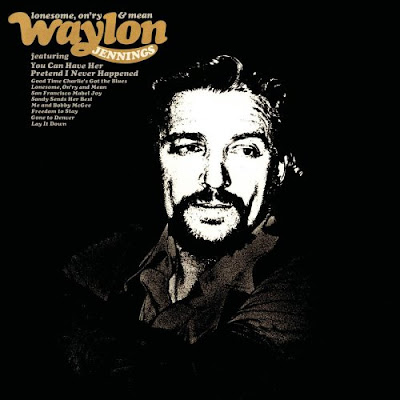 
When the producer-driven Nashville sound reinvigorated country music, Waylon Jennings wasn't happy. It meant producers chose his songs and session players recorded them -- not his band. When his contract came up for renewal in 1972 he and his manager demanded Waylon produce himself. Lonesome On'ry and Mean, which debuted on Billboard's Hot Country LP chart on April 7, 1973,  is the first album under the new deal.

Honky Tonk Heroes, released later in 1973 is considered the first of the outlaw country albums but Lonesome is where the transition happens. Three songs were recorded before the deal  but the rest were recorded by Waylon Jennings and the Waylons. The sound is more stripped down. The songs are just more "real" than what anybody else was recording.

Jennings covers Danny O'Keefe's "Good Time Charlie's Got The Blues", Mickey Newbury's "San Francisco Mabel Joy" and Kris Kristoffersen's "Me and Bobby McGee".  His cover of the country standard, "You Can Have Her", hit the Top Ten. But the title cut, by renegade Steve Young, captured the new outlaw image that would make Jennings a legend:


Now I'm down in this valley,
Where the wheels turn so low
At dawn I pray,
to the Lord of my soul
I say do Lord, do right by me
You know I'm tired of being lonesome on'ry and mean

Lonesome On'ry and Mean comes with bonus cuts including the previously unreleased single  "The Last One to Leave Seattle".