40 Year Itch : Stay On The Bus; Forget About Us 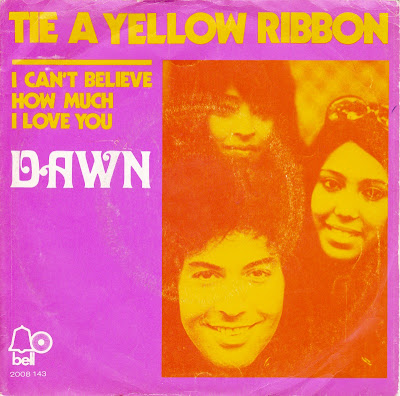 You can't go a whole year discussing the music of 1973 without mentioning the year's biggest hit. For 4 weeks beginning April 21st, Tony Orlando and Dawn's "Tie A Yellow Ribbon Round The Ole Oak Tree" was the number one song on the charts. Even country radio stations were playing it!

It may be corny but the song is based on the true story of a convicted bad check writer heading home to White Oak,  Georgia by bus and wondering how his wife would respond to a letter he'd written. He wrote that he'd understand if she never wanted to see him again. But if she still loved him could she let him know by tying a yellow ribbon around an oak tree in the city square. As the bus rolled into town, passengers spotted the yellow ribbon and broke into cheers as the writer broke down and cried.

The story made the AP Wire and inspired songwriters Irwin Levine and L Russell Brown.

At first, Tony Orlando thought it was too corny to record ( this from the guy who also sang "Say, Has Anybody Seen My Sweet Gypsie Rose") but he found himself humming the song over and over and finally gave in.

"Tie A Yellow Ribbon" is the second most recorded song of the rock era ( after "Yesterday") and yellow ribbons themselves have become a symbol to welcome home soldiers, hostages...you name it.