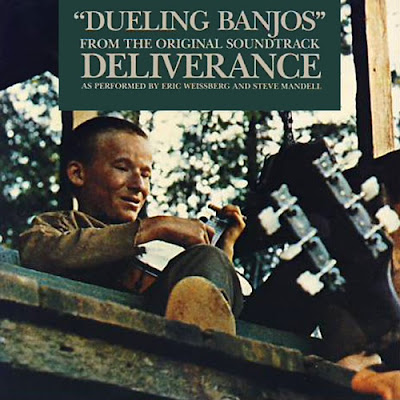 
If something in the entertainment industry works, you can bet it will be replicated over and over again until it doesn't work. Such is the case of the surprise smash hit "Dueling Banjos" which spent four weeks in 1973  at #2 on the Billboard Hot 100 Charts, right behind Roberta Flack's "Killing Me Softly With His Song".

Weeks after Deliverance hit movie theaters in 1972, "Dueling Banjos" first got radio play in Atlanta thanks to listener requests. It soon went nationwide. It wasn't only the people who saw the movie that wanted to hear it. There was something else about it. When "Dueling Banjos"  became a jukebox favorite bartenders eventually demanded it be taken off the boxes.

Mike Mowers of Radio Doctors told Billboard Magazine "The bartenders said they were going insane. They just couldn't take that nerve wracking music as many times a day as it was being played."

Though falling off the pop charts by April of 1973, "Dueling Banjos" was still a Top 10 hit on the country radio scene. There were cover versions coming out in a flurry. A duo called Jay And Chet knocked out a single called "Dueling Guitars". Radio stations were also getting more requests for classic bluegrass artists like Flatt and Scruggs and The Banjo Barons.

And some successful releases following the bluegrass trend were also hitting the charts.


Eventually we all felt like the bartenders.Radio programming consultant Kent Burkhart explained why:

"The tympanic nerve in the inner ear remembers sounds; after people hears the same music over and over again, the nerve actually instructs them to switch radio channels if the music comes on again".

For the final word, here's Martin Mull with  "Dueling Tubas"