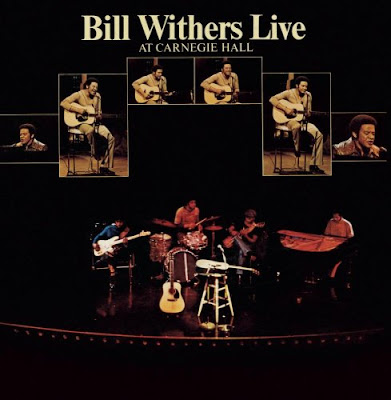 We had been up all night the night before rehearsing together, even arguing with each other --each of us with only one thing in mind, to do our best.
Bill Withers

On a rainy Friday Evening in early October, 1972, Bill Withers -- just two years from working full time for an aviation company--took the stage at Carnegie Hall with his crack band. Nervous? More like excited. Withers has always been disarmingly himself. Still Bill. He's the kind of guy you want to meet for beer and conversation. The kind of a guy you want for a friend.

And that night Withers returned over and over again to the theme of friendship. Brotherhood. Family. Would  today's popular male artists ever record a song with lyrics like those of  "For My Friend"?:

Then there's " I Can't Write Left-Handed" sung from the point of a view of an injured soldier who seems more concerned about his younger brother than himself:

The magical video below, from a 1973 BBC concert includes the songs "Ain't No Sunshine", "Lonely Town, Lonely Street", "Grandma's Hands", "Use Me", "Let Me In Your Life", "Lean On Me", and "Harlem"  but, best of all, you can see Bill Withers sitting for a spell and just talking like a friend.

Live at Carnegie Hall captures an even more special evening. There may have been thousands in the audience-- all there presumably to hear the hits (an eight minute jamming version of "Use Me", "Ain't No Sunshine", "Lean On Me") but it wasn't long before they were taken in by the man from Slab Fork, West Virginia.

By the time we got into "Harlem", us and the audience had become all happy members of one big band all on one stage. In about an hour and a half that audience transformed us all from nervous, serious musicians into free and happy people. I know I'll never forget it.
at 2:00 AM