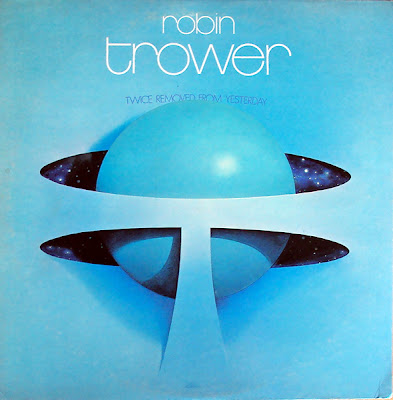 Robin Trower had a few moments he was allowed to really shine as a member of Procol Harum. There was "Whiskey Train" on the 1970 album Home and....um...well....


So it was only a matter of time before Trower left the band, eventually teaming up with ex Stone the Crows bassist Jim Dewar and drummer Reg Isidore. With ex Procol member Matthew Fisher working the boards, they recorded 1973's Twice Removed From Yesterday.

The album , featuring the lead off cut " I Can't Wait Much Longer" and "Daydream",  is a complete triumph despite the fact that critics piled on Trower for his Hendrix -inspired guitar playing and Dewar's Paul Rodgers -inspired singing. Both will astonish today's listeners.

Seriously, in order to scratch our collective 40 year itch, I'm living in 1973... and this is my favorite discovery of the month.

I can understand why we're not listening to old boogie albums by Johnny Winter and Humble Pie. They haven't aged well. What Trower did all the way up to 1976's live album is never less than timeless.

Thanks to major American touring on Twice Removed , Trower became a guitar hero when he released the follow-up Bridge of Sighs, a #7 US hit in 1974. Trower is still going strong. He just released a new album called Roots And Branches which made the Billboard Blues charts. You can keep up with the guitar hero on his website TrowerPower.com
at 2:00 AM