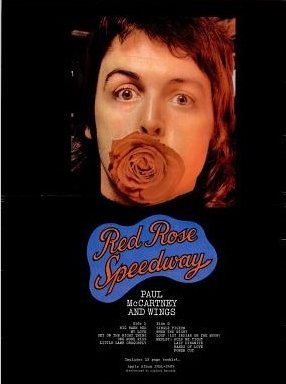 Originally conceived as a double album, the eventual Billboard Album Chart topper Red Rose Speedway finds Paul McCartney more interested in creating sophisticated sounds and songs (with a lot of major seventh chords)  than saying anything interesting. Lyrics like "Well, the night is beautiful and mellow/ You said right, made me a happy fellow" probably didn't take Macca a long time to put to paper.

It's telling that my favorite song on the album ( this week) is "Get On The Right Thing". It was recorded two years earlier for Ram.

Still, the chart success of Red Rose and especially of the #1 single "My Love" gave McCartney a necessary boost. Especially coming after 1971's  Wild Life which stalled at #10.

Critical success was something else. Although Rolling Stone's Lenny Kaye called the album "the most overall heartening McCartney product given us since the demise of the Beatles" he also noted filler like "Loup (1st Indian on the Moon)" and "Single Pigeon". The 11-minute "Medley: Hold Me Tight/Lazy Dynamite/Hands of Love/Power Cut" unfavorably recalls side two of Abbey Road. The songs sounds half-assed.

But don't lose hope fans! Following a tour, Paul McCartney and Wings would go on a tremendous misadventure to Nigeria. If they got out alive, they'd be bringing back their greatest album by the end of the year.
at 2:00 AM