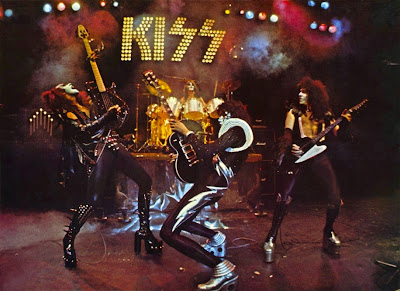 On May 15, 1975, in the midst of their Dressed to Kill tour,  Kiss devoted the day to publicity for the upcoming Kiss Alive album by shooting a promo video for Casablanca Records and posing for photographer Fin Costello at an otherwise empty Michigan Palace. 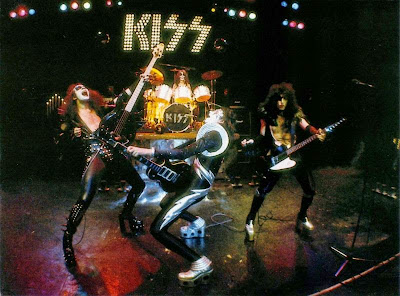 I got them to do the 'STATUS QUO' pose (Gene's words) a few times, which is where the shot came from. At that time we were just shooting every idea that came to mind. I was still thinking we would get the cover shot at the actual gig." 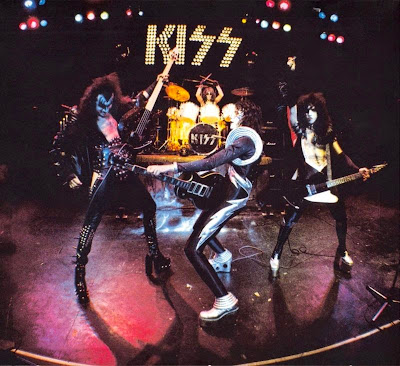 For the promo video, the band gave it everything they had. No shortage of energy or stagecraft despite the fact they were playing to an empty room. They cut in shots of the audience from the Cobo  Hall show in Detroit the following night

The following night rock critic Jaan Uhelszki , in full makeup and costume, went onstage with the band. She wrote about the once in a lifetime experience in an article for Creem called "I Dreamed I Was Onstage with KISS in My Maidenform Bra" 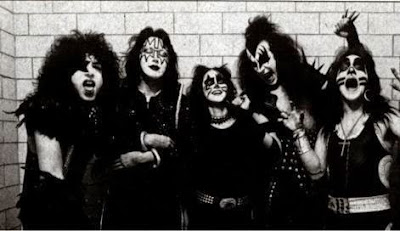 Countdown. Then the shove and I’m on stage, moving like I’m unremotely controlled. Forgetting completely that I ‘m in front of 5,000 people participating as one fifth of this sadistic cheerleading squad, bobbing and gyrating in instinctively, I no longer hear the music, just a noise and a beat. On cue I strut over to Simmons’ mike and lean into it and sing. Singing loud without hearing myself, oblivious to everything but those four other beings onstage. Gene whispers for me to “shake it” and I loosen up a little more, until I feel like a Vegas showgirl going to a go go. Suddenly it strikes me: I like this. And I venture a look at the crowd, that clamoring, hungry throng of bodies below me. All I can think at that moment is how much all those kids resemble an unleashed pit of snakes, their outstretched arms bobbin and nodding, as if charmed by the music. I wonder if they will pick up on the hoax? But they keep screaming and cheering, so I might just as well be Peter Criss, unleashed from his drum kit, as anyone. The only difference is, I am the only KISS with tits.