40 Year Itch: Heroes of the Ginza 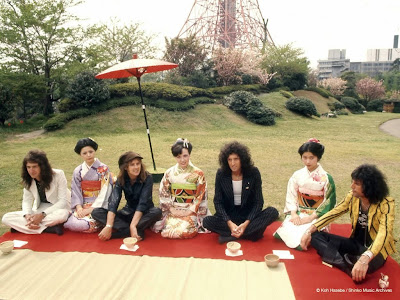 After a ten day vacation in Hawaii, following the US leg of their Sheer Heart Attack Tour, Queen arrived in Japan where they were met by 3,000 fans at the airport.
"Now we were the Beatles" guitarist Brian May would later say. "We literally had to be carried over the heads of these kids...this wasn't a rock band thing, this was being a teen idol".

Sumo wrestlers were hired as bodyguards during the concerts but they could do nothing to prevent the teenage girls from sweeping over them to the front of the stage. Hysteria followed Queen wherever they ventured so each member was assigned his own bodyguard.

In August they'd be back in the studio to begin recording A Night at the Opera where the band and producer Roy Thomas Baker would face a phenomenal challenge, recording a long tune with many twists and turns and even some operatic "Gallileo"s tossed in for good measure. It was known to the rest of Queen as  "Fred's Thing". But it would be known to the world as "Bohemian Rhapsody".