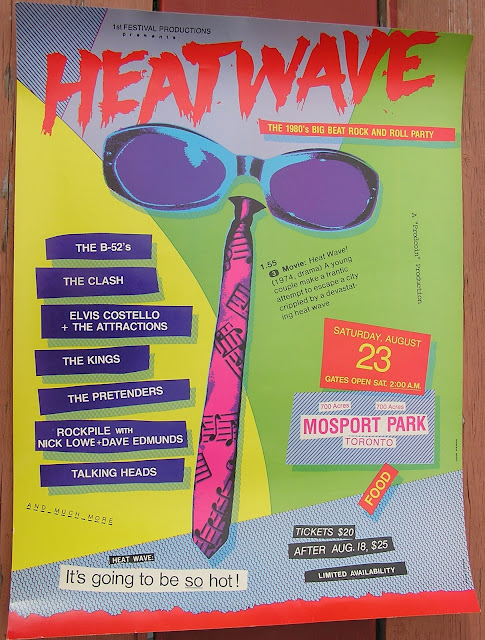 On August 23, 1980 Heatwave, a day-long New Wave music festival held near Toronto on August 23rd drew more than 60,000 people who saw Elvis Costello and the Attractions, Talking Heads, the Pretenders, the B-52's and Rockpile. Promoters need 90,000 to break even and failed.  They blamed the lower-than-expected turnout on four factors: a limited advertising budget that didn't penetrate U.S. markets deeply enough and didn't include a sufficient budget for print ads; the lack of a big-name crossover artist like Tom Petty or the Cars, which would have attracted a broader audience; the riot that broke out a few days before the festival when Alice Cooper failed to appear at a concert at the nearby Canadian National Exhibition; and lack of support from record companies which were were reluctant to help with advertising costs and even wanted to charge the festival for photos and biographical material. It didn't help that The Clash dropped out. Overall promoters lost a million dollars.

But even if Heatwave wasn't a smashing commercial success, it was an artistic triumph. Particularly noteworthy were performances by Talking Heads and Elvis Costello (his only North American appearance so far this year). The Heads appeared with an expanded — and funk-infused — lineup of nine musicians, including keyboardist Bernie Worrell from Parliament-Funkadelic and guitarist Adrian Belew, who's played with David Bowie. Costello appeared friendlier than usual as he chatted and joked with the crowd ("Hi, we're the Clash" were his opening words), which brought him back for three encores.