The making of URGH ! A MUSIC WAR 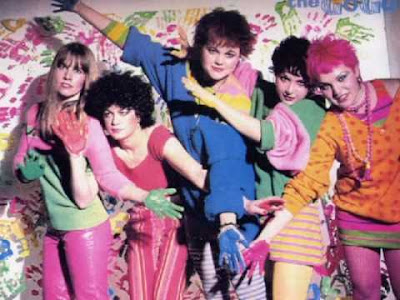 Oingo Boingo : Ain't This The Life

On the weekend of August 16 British filmmakers, working with IRS Records and FBI Booking Agency,  showed up at various Los Angeles venues to shoot performances that would appear in a 1981 concert movie called Urgh! A Music War.

It all began on a Friday night at Santa Monica Civc Center with sets from Chelsea ("I'm On Fire") and the Dead Kennedys ("Bleed For Me"). X followed with a version of "Beyond and Black", followed by The Cramps playing "Tear It Up" with their new guitarist Julien Hechtlinger, aka Julien Grindsnatch.

The next night featured Stiv Bators, who didn't make the cut. Wall of Voodoo followed with "Back In Flesh". The Members("Offshore Banking Business")  were next and then came Pere Ubu with "Birdies". David Thomas looked like a junior banking executive.

Magazine followed with a version of "Model Worker". Said a reviewer from Sounds "Howard Devoto was looking like an over-intelligent lift-operator from another world dropped into a disco".

On Sunday night the filmmakers moved to the Whiskey A-Go-Go to film The Surf Punks performing "My Beach", followed by The Go-Go's with "We Got The Beat".

The Alley Cats took the stage that night to play  "Nothing Means Nothing Anymore" and a band called Oingo Boingo with "Ain't This the Life".

In San Francisco they would catch Devo on stage.

The following weekend the crew would be in New York City catching performances by The Fleshtones, Joan Jett and, most memorably,  Klaus Nomi performing "Total Eclipse". The movie would be released in 1981 along with a soundtrack by A+M Records which may why The Police, shot in September along with the likes of XTC and Echo and the Bunnymen, get three songs on the soundtrack.

Both Talking Heads and The B-52's both turned down offers to appear in the movie.