The Associates' The Affectionate Punch is excess at its best 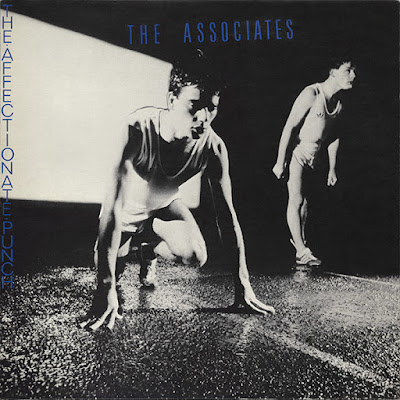 The Associates : The Affectionate Punch

On August 1, 1980 The Associates released their debut album The Affectionate Punch on Fiction Records, the New Wave label they shared with The Cure. Not everyone knew what to make of the Edinburgh duo featuring singer Billy Mackenzie and Alan Rankine. They had both made a living performing in cabarets before deciding to develop the unique pop sound you hear on this album. It's a sound, notes Rip It Up And Start Again author Simon Reynolds  "based around their mutual appreciation for the more eccentric end of glam ( Roxy Music, Sparks), disco and movie scores. Rankine was the musical genius. But MacKenzie's voice brings to mind the golden age of torch singers and, quite clearly, David Bowie.

Give the first single, the title track, a listen:

"We threw in everything but the kitchen sink," Rankine told Reynolds. "When we recorded, we never had enough time or tracks."

Upon its release, The Affectionate Punch was declared “a kind of masterpiece" by Paul Morley of the NME, who described it as “a passionate cabaret soul music, a fulfillment of the European white dance music Bowie was flirting with back then.” 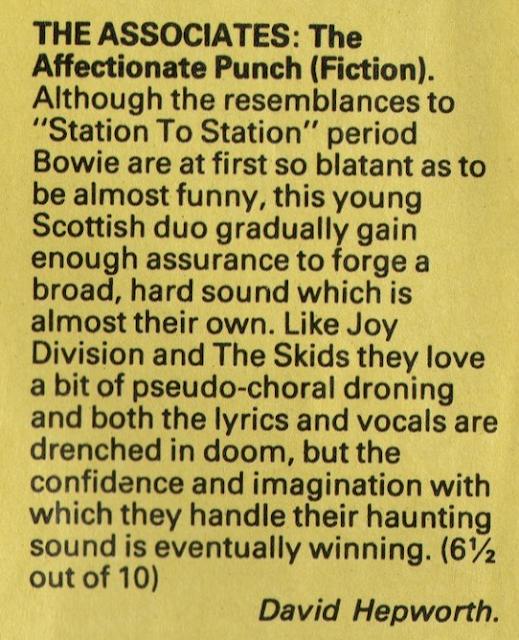 The second single , "A", recites the alphabet in a post punk setting. That guitar sound is at least four years ahead of its time.

For reasons I can't hear, Rankine went back and remixed the entire album the following year while The Associates were releasing six singles in quick succession, including their best song "White Car In Germany".

In retrospect listeners have locked into the gloom that pervades some of the songs. Billy Mackenzie died of an overdose in 1997.

In the meantime this is an album that grows on you. You have to force yourself to listen a few times because there is so much going on here.  Overwhelmed by the "kitchen sink" arrangements at times, I find myself preferring something along the lines of "Deeply Concerned". By the mid-80's the radio was filled with swaying synthpop tunes like this, but at the start of the decade I imagine this is likely where it started.

Labels: 1980, Rip It Up And Start Again, Simon Reynolds, The Affectionate Punch, The Associates