Queen's "Another One Bites The Dust" enters US charts 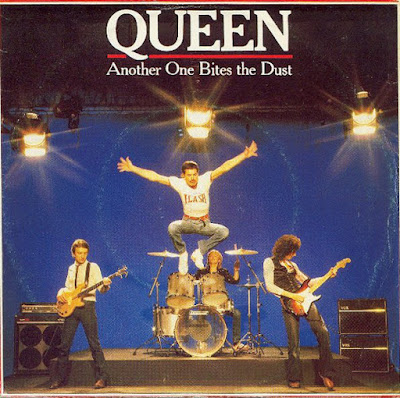 Queen : Another One Bites The Dust

On August 16, 1980 Queen's smash hit "Another One Bites The Dust " entered the US charts at #67. It would top the US charts for three weeks, selling seven million copies, making it the all time top selling single for the band. Written by bassist John Deacon, who plays most of the instruments,  the song was inspired by Chic's "Good Times".

Well, that Queen record came about because that bass player spent some time hanging out with us at our studio. But that's OK. What isn't OK is that the press started saying that we had ripped them off! Can you believe that? 'Good Times' came out more than a year before, but it was inconceivable to these people that black musicians could possibly be innovative like that. It was just these dumb disco guys ripping off this rock 'n' roll song."

"Credit for the song should go to Michael Jackson in many ways," Freddie Mercury said. "He was a fan and friend of ours and kept telling me, "Freddie, you need a song the cats can dance to." John introduced this riff to us during rehearsal that we all immediately thought of disco, which was very popular at the time. We worked it out and once it was ready, played it for Michael. I knew we had a hit as he bobbed his head up and down. "That's it, that's the gravy. Release it and it will top the charts," he said. So we did and it did."