Devo's Whip It is a New Wave classic 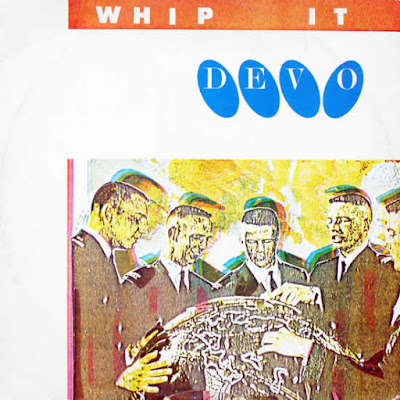 We were afraid the Republicans were going to get in there [in 1980], and they sounded very nasty all the time.They were running this guy, Ronald Reagan, that seemed like a total--he seemed like he didn't even had a brain. We were like, "how could that be our president? That's impossible, that they choose him to run for president". So we were writing this music that was like "You can do it, Mr President". And then, of course, we were doing lots of interview back then, and we'd have to get up at seven so we could go be on a morning talk show while people are driving to work. And we'd be sitting in the other room waiting to go in and talk to the disc jokey, and he's be on the air, going, "You know, I whipped it just the other day, haw haw haw haw" and we're like "What an asshole". We felt very misunderstood. And then it just gave us more reasons to be crabby."

When it came time to do the video, Devo went full board on the S+M theme. Warners provided $15,000. Set on a dude ranch, Mark Mothersbaugh whips a hat, cigarette and finally the clothes off a striking woman as cowboys and girls cheer. The woman, Shaylah Spitz-Kalmus was a 20 year old dancer who worked as a cashier at a bakery in Venice, California. She is still recognized as the woman in "Whip It". 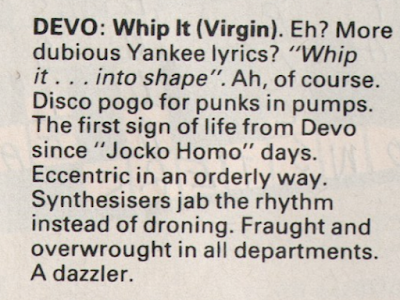