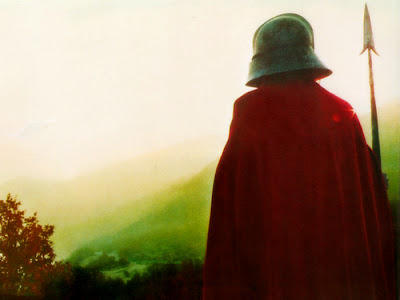 The year after Wishbone Ash won Melody Maker's Brightest Hope Award, they delivered Argus (on April 28,1972), their third album, a progressive rock classic, and the best selling of their career. Written for the most part on acoustic guitars, songs like "Time Was", "Sometime World" and the classic "Blowin' Free" all build up in intensity and let loose into full blown twin guitar jams --some of which rock out in the spirit of The Who. (Wishbone Ash had opened for The Who on their US tour of Tommy.)

The band's claim to fame was their dual lead guitars ( Andy Powell and Tim Turner) and bassist-lyricist Martin Turner's lyrics, which on Argus involves fair maidens, warriors and leafs and streams. The album cover, by Hipgnosis, was shot with the sentinel dressed in a costume from Ken Russell's film The Devils.
.

There are moments of exquisite beauty. The folky track "Leaf And Stream" (below)  has lyrics from drummer Steve Upton. But, for an instant feel to the album, check out the second track "Sometime World". Powell told the website ProgSheet it is his favorite track:

I liked (bassist) Martin Turner’s vocals when he sang naturally like this, instead of the later more contrived Bowie-esque thing he tried towards the end of the 70’s. His chord section and melody gave way to my construction of the fast section which opened with a high A chord to G chord inversion, almost Mexican in flavor. The three part guitar and vocal scat melody over this was a flash of inspiration for which I was responsible, as was the entire contrapuntal bass part which Martin executes admirably. I love Steve Upton’s drumming and the whole thing is overlaid with my solo guitar work - some of the best and most inspired work I’ve ever done. It really captures what I’m about as a player and I love the song for offering me the canvas upon which to show my particular mojo.


Turner remixed the album in 1989. The 2002 version contains three live tracks from the EP Live In Memphis. If you don't know Wishbone Ash, this is the place to start. It was named 1972's album of the year by Sounds Magazine and "Top British Album" by Melody Maker. Argus remains one of progressive rock's greats.

The album's popularity (#3 in the UK) sent Wishbone Ash onto a stadium filling US tour, usually second or third billed,  leading to guitarist Tim Turner retiring with exhaustion