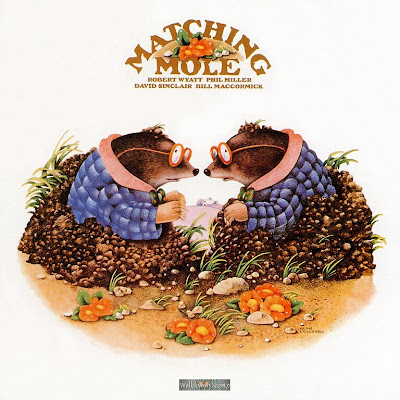 As Roberta Flack's "First Time Ever I Saw Your Face" topped the Adult Contemporary Singles chart for six straight weeks, an arguably even more beautiful song was released by a Canterbury Scene super group called  Matching Mole. The song is "O Caroline", inspired by British artist Caroline Coon, performed by former Soft Machine vocalist/drummer Robert Wyatt and former Caravan keyboardist David Sinclair. There are conflicting reports about whether she was Sinclair's or Wyatt's ex.

But it is Robert who sings:

David's on piano and I may play on a drum/ and we'll try to make the music work/ We'll try to have some fun/
But I just can't help thinking that if you were here with me/I'd get all my thoughts in focus/and play more excitingly/
I love you still Caroline. 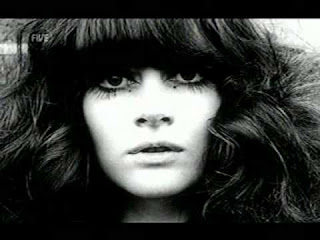 Machine Mole was very much Robert Wyatt's band. The name is a play on the french phrase for Soft Machine ( Machine Molle). It is a strange album. Lovely  and odd at times. Ear wrenching especially on Side Two. 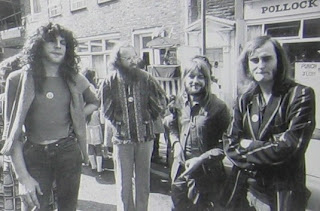 
The fact is that is I created a skeleton framework upon which I constructed a sequence of events around the wondrous mellotron and so on. Maybe it was a group recording, but the production was where I took the opportunity to take over, and there was nothing the group could really do about it.

Much of it was improvised and some of it recorded completely solo by Robert. It was rather thrown together and certainly not what CBS were expecting. Eventually Dave Sinclair was eased out, he was never entirely happy with the way we were progressing. It was a bit too free for him.

Check out a July performance by Matching Mole on the French TV show Rockenstock. Wyatt wears the strange ski mask: Although these songs are from the second album, this is what most of the Matching Mole debut sounds like.

Though the band failed to make any money, Wyatt was planning to record a third album when , during an alcohol fueled party, he fell out of a third floor window and was paralysed from the waist down. Wyatt is still alive and very much one of the great British singer/songwriters of our time.