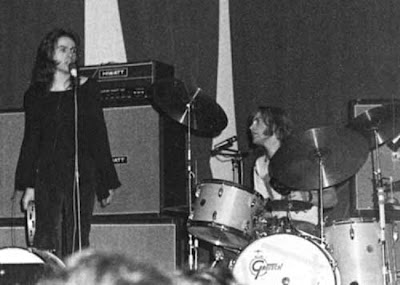 On an Italian tour to promote their third album Nursery Cryme , the members of Genesis were interviewed backstage at Rome's Piper Club moments before they took the stage. Peter Gabriel was still applying mascara during the interviews. A shaggy Phil Collins talks about the band being a democracy. ( He'd recently been given his first lead vocal on Cryme's "For Absent Friends") Mike Rutherford says the band prefers audiences that sit down and listen to the music. We also listen to the first two songs played that night. "Happy The Man , recorded a week earlier as a single. (Interestingly, it was the A side to Slade's Mama Weer All Crazee Now" on 45's printed for Italian jukeboxes). Later, we hear some of "Stagnation" from the band's Trespass album.

Months earlier, on March 20th,  Genesis recorded a half hour concert for Belgium's "Pop Shop". The quality is outstanding and Gabriel is absolutely hypnotic.

The tracks are in order:

1. Fountain of Salmacus
2. Twilight Alehouse
3. The Musical Box
4. Return of the Giant Hogweed

In August the band began recording one of their greatest albums, Foxtrot,which would be released in October.
at 7:21 AM