When the Stones recorded "All Down the Line" at Nelcote, the sixteen room mansion Richards rented in the Summer of '71, engineer Andy Johns remembers Mick saying "This is a single. This is the single!" Johns thought Mick was out of his fucking mind:

And I went out and said to him "You're wrong about this. This is not a single?" And he went "Really? Do ya think so?" And that was the first time I realized "Jesus , he'll actually listen to me". 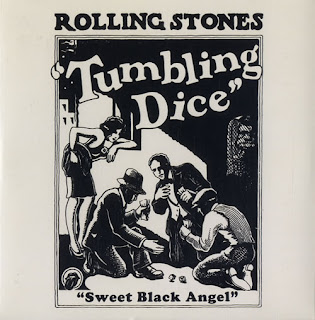 In the end it was "Tumbling Dice" that became the single. Johns recalls:

I think we may have spent two or three weeks just getting the track on that. That was just a performance thing. And the could play really badly,those guys. Most of the time, they were fucking terrible, There must have been some arrangement of it during the period but what I remember is just looking for a magical performance. But it went on and on and on. I had about thirty or forty or fifty reels of tape on that one song"--from Exile On Main St. by Robert Greenfield.
(Between 15 and 25 hours worth)

The single peaked at #5 in the US. #7 in the UK. But it topped Creem/ Rolling Stone critic Dave Marsh's list of the best singles of the year:

1. Rolling Stones Tumbling Dice
2. Derek And The Dominos Layla
3. Temptations Papa Was a Rollin' Stone
4. Curtis Mayfield  Freddie's Dead
5. Mott The Hoople All the Young Dudes
6. O'Jays Back Stabbers
7. Johnny Nash  I Can See Clearly Now
8. Al Green  I'm Still in Love with You
9. The Band  Don't Do It
10. Carly Simon You're So Vain
11. Al Green Look What You Done for Me
12. War Slippin' into Darkness
13. Harold Melvin And The Blue Notes If You Don't Know Me by Now
14. Mel And Tim Starting All Over Again
15. Paul Simon Mother and Child Reunion
16. Luther Ingram  (If Loving You Is Wrong) I Don't Want to Be Right
17. The Stylistics Betcha by Golly, Wow
18. Curtis Mayfield Super Fly
19. The Who Join Together
20. B J Thomas  Rock and Roll Lullaby
21. The Spinners Could It Be I'm Falling in Love
22. War The World Is a Ghetto
23. Michael Jackson I Wanna Be Where You Are
24. Rod Stewart You Wear It Well
25. Todd Rundgren I Saw the Light
26. The Chi-Lites Oh Girl!
27. Alice Cooper School's Out
28. The Spinners  I'll Be Around
29. The Faces Stay with Me
30. The Stylistics I'm Stone in love with You
31. The Hollies Long Cool Woman (In a Black Dress)
32. Elton John  Rocket Man
33. Michael Jackson Rockin' Robin
34. Timmy Thomas Why Can't We Live Together
35. Arlo Guthrie The City of New Orleans
36. Looking Glass Brandy (You're a Fine Girl)
37. Bread Diary
38. The Staple Sisters I'll Take You There
39. Rick Nelson Garden Party
40. Ringo Starr Back Off Boogaloo
at 12:30 AM