40 Years Ago Today : Elvis On Tour 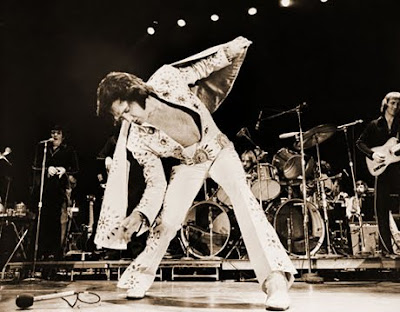 "My daddy had seen a lot of people who played guitars and stuff and didn't work. So he told me, you should make up your mind about either playing guitar or being an electrician. I never saw a guitar player that was worth a damn." - Elvis Presley, opening lines of Elvis On Tour


The concert footage in the 33rd and final Elvis Presley movie, Elvis On Tour, was mostly shot April 9, 1972 in Hampton Roads, Virginia. The King --who received a million dollars to take part in the film--came out wearing his "blue nail" one piece sequined suit and entertained his audience with the following songs:

See See Rider
Proud Mary
Never Been To Spain
You Gave Me A Mountain
Until It's Time For You To Go
Polk Salad Annie
Love Me (in the classic  movie outtake below, Elvis does NOT ignore the underwear tossed on stage)

The Hampton Roads newspaper, The Daily Press sent reviewer, Kathy Wells - now Kathy Van Mullekom, the gardening columnist - who exclaimed that the performance of "the living legend" wouldn't be forgotten and that it "left sweet memories of a dashing hero."

Check out the trailer for ELVIS ON TOUR


Among the editors working on the film: Martin Scorsese, who oversaw the montages between the concert footage. Three other April concerts were filmed for Elvis On Tour including those in Richmond, Greensboro and San Antonio. Each one ended with the announcer telling the crowd: "Elvis has left the building".

Though still in fighting shape, Elvis gained weight on the tour. He'd soon become addicted to Demerol.  Friends say he never recovered from his separation with his wife Priscilla. The King died in 1977.