40 Years Ago Today: The Faces on BBC2 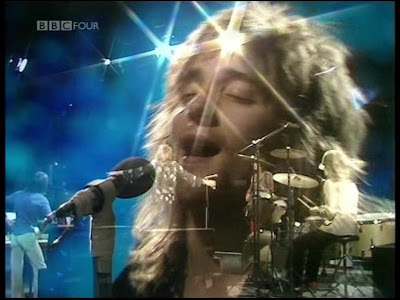 On April 1st, 1972, BBC2's "Sounds for Saturdays" aired a 43-minute performance by The Faces, then at the peak of their powers and popularity.


Here now is the concert in its entirety.

After the BBC2 show and four gigs around the UK, The Faces went on a short US tour. They spent much of 1972 on the road playing both Faces and solo Stewart tunes. "Maggie May" would usually invoke some kind of a stage rush. Stewart tried not to overshadow the rest of the band. As he told a reporter from Rolling Stone : "We're a band, and I want people to realize it's a band up there.The other guys in the band are strong, too, in what they do. I wouldn't be in this band if I didn't think they were equally strong."

Dave Marsh of Creem describes The Faces on stage:

Stewart bounds across the stage with his Groucho walk, leaning into the mike and crooning like some obscene parody of Bing Crosby; Wood has all the perfectly timed and intuitively choreographed moves of the best British guitarists; Lane tromps about like a drunken sailor. McLagan and Jones don't do much, but they provide the backbeat that's a necessity as backdrop for the theater.