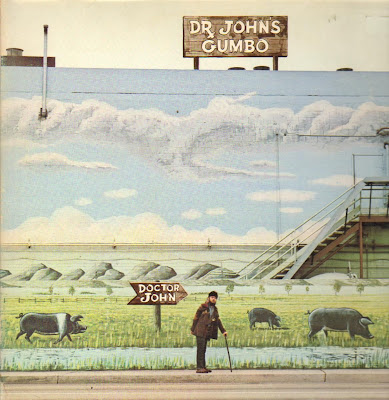 "In 1972, I recorded Gumbo, an album that was both a tribute to and my interpretation of the music I had grown up with in New Orleans in the 1940s and 1950s. I tried to keep a lot of the little changes that were characteristic of New Orleans, while working my own funknology on piano and guitar."
---Dr John in his autobiography Under a Hoodoo Moon

Gumbo is certainly among the first five albums anyone with an interest in New Orleans music should own.
The other four are ( and here's where I probably get in trouble)  Mardi Gras In New Orleans, The Meters's Rejuvination, Professor Longhair's New Orleans Piano, and the 52 track Minit Records Story. ( Please argue the case for your own albums in the Comments section below).

Released on April 20, 1972 Gumbo contains some of the old New Orleans R and B standards Dr John used to play around the Crescent City before he went all psychedelic gris-gris on us and turned into The Night Tripper. The album even features some of the musicians who played on the original hits. Folks like Lee Allen on tenor sax and Melvin Lastie on cornet.Shirley Goodman of Shirley and Lee ( "Let The Good Times Roll") sings some backing vocals. The drummer (very much highlighted in "Junco Partner") is fellow New Orleanian Freddie Staehle and as Dr John pointed out in his book, that was a crucial choice.

Rather than play the one-bar patterns typical of most and even R&B drummers, the New Orleans schooled drummer  will break up the beat into two and four bar patterns ( and sometimes even an eight bar pattern). Two and four on the back beat is sometimes only implied;  sometimes the grooves is felt in cut time, which is one half the tempo, or double time, doubling up the groove.

The album was produced by Jerry Wexler and Harold Batiste, the producer and arranger behind such N'Awlins hits as Joe Jones's "You Talk Too Much" and Lee Dorsey's "Ya Ya" . It was Batiste who convinced session musician Mac Rebennack to take on the Night Tripper persona in 1968. Dr John plays covers of hits from artists like Earl King, Ray Charles, "Sugar Boy" Crawford, Lloyd Price and Huey Smith and the Clowns. One of the stand out tracks is Dr John's version of Professor Longhair's "Tipitina".

As he said of the New Orleans anthem  in the Gumbo liner notes:

I heard it played live by 'Fess' a hundred times. My pop used to install and maintain sound systems in different clubs in New Orleans and he used to take me around.... I can play 'Tipitina' with dozens of variations without ever getting away from Professor Longhair; the version I'm playing here is pure classic Longhair.

Finally Gumbo marks a high point in Y'at culture. Dr John never misses an opportunity to pronounce "turn" as "toin". The accent alone takes me back to New Orleans.