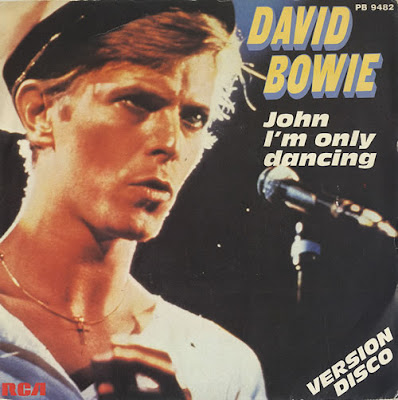 On September 1, 1972 David Bowie released the single "John, I'm Only Dancing". A gay anthem? It never struck me as such in my teenage years. I figured Bowie was dancing with John's girlfriend and explaining to his mate "we're only dancing". But because of the supposed subject matter, the song didn't get played in the US even as Bowie strutted onstage in full Ziggy Stardust mode, drawing full houses for his concert tour.

In the UK, the single peaked at #12 as would the 1979 sequel "John, I'm Only Dancing ( again)". Queen stole the strumming guitar intro for "Crazy Thing Called Love". Trevor Bolder is playing the walking bass lines. The official video, seen below, was banned for its sexually suggestive dancers.