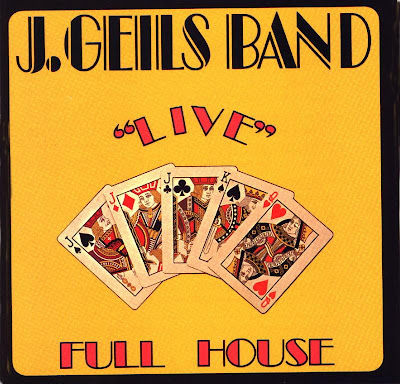 Jive talking bad ass Peter "Gotta Get It Crazy Can't Get It Lazy" Wolf's stage persona must have - I mean MUST HAVE - taught both Aerosmith's Steven Tyler and Bruce Springsteen a thing or two about crowd manipulation. Recorded over two nights at Detroit's Cinderella Ballroom, Peter Wolf keeps the party going on this short, just 33 minute album Full House ( released September 26, 1972)  All but "Hard Drivin Man" are covers. Mostly obscure rhythm and blues and 50's rock and roll. There's only one extended jam , a 9:32 cover of John Lee Hooker's "Serves You Right To Suffer".

This was a different J Geils Band from the one that gave us angels in a centerfold. This was a band that was constantly on the road with the "soul" intent of making audiences feel like they were the seeing the greatest rock band in the world...and proving white boys could play the blues. Be prepared to be blown away.

Here below is another 1972 performance by the J Geils Band. This time in Boston. The video may be a little crunchy but the sound is excellent. Check out Magic Dick on his lickin stick and the keyboards of Seth Justman. This is how it's done.