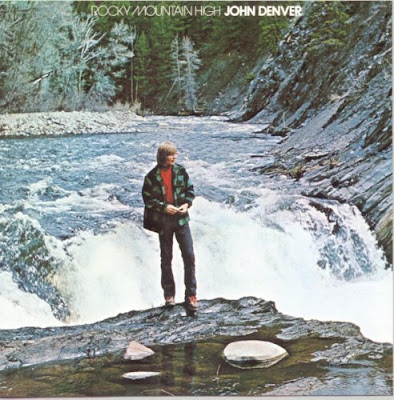 True story. My dad and stepmother were friends with John Denver. I grew up with Rocky Mountain High so it is with some self-enforced detachment that I have to say this is probably not his best album. I'd give the nod to 1971's Poems, Prayers and Promises.

Rocky Mountain High, released September 15, 1972, was Denver's first Top Ten album. And though it contains the title track,  a Top Ten hit that has become his most famous song and one of the state songs of Colorado, there isn't much else to recommend. "Goodbye Again" is a re-write of "Leaving On a Jet Plane" and the Season Suite just doesn't do much for me.

That said, I thought this might be a great place to share my dad's 1974 letter to Denver, shortly after we all saw him at the New Haven Coliseum. My stepmother went backstage that year. We'd gone the year before and saw the ping pong table Denver liked to play on ...to relax before a show. There was the smell of herb in the air and a whole lot of cheers every time Denver shouted "Far Out!"

Dear John: Your concert in New Haven was stupendous! My God, when you came on stage that first moment and the Coliseum roared...it must be an extraordinary sensation, rather frightening, rather pleasing, rather contemptible even. I mean how is it possible not to react with something approaching scorn at the animal that gets unleashed. There is that crowd aura, that same frenzied grip that politicians strive for, that Hitler achieved ( he, too, had at Nuremberg that astonishingly staged and managed show which created a crowd frenzy). I don't mean to compare you to Hitler, my friend, all I mean is you have achieved that same quality of having crowds react to you but that, unlike Hitler, of course you deserve it.

You gave the impression of being perfectly at ease, in control and professional all of which you are, but it came across. And I think your music--that is, the songs you write, are getting more and more beautiful and lyrical. I think "Sunshine on My Shoulder" (sic) is one of the loveliest songs I've heard in years. Very simple, very true like all good writing must be. And "Goodbye Again" is lovely too. Of course "Rocky Mountain High"--the title suddenly for the first time struck me as perfect for a high school in Denver. Wonderful idea, the little girl saying "I'm at Rocky Mountain High" and the other responding "I'll say..."--anyway , Rocky Mountain High is such a pleasing song and a nice thought.


I remember once being on acid at Vale (sic) and suddenly thinking I'd been dropped into a Nazi pre World War II training camp, getting nervous about it, knowing I was on acid, thinking if only I could piss it out of me I'd be all right. But every time I'd head for the can, I'd have to pass the wooden beamed staircase and all the ski boots clomping up and down would make me think I'd fallen into Gestapo Headquarters and I'd flee in a panic for the outside, terrified that someone would speak to me and find out I couldn't speak German. Which, of course, 50% of the people around me were speaking. It was German week or something. It was funny in retrospect and scary at the time. 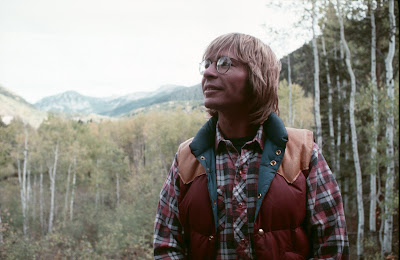 Still, back to the concert, the children loved it. Little Amanda bobbed up and down, boogaloo'd, my 9 year old daughter, Lansing, ( who somehow managed to pass the word to her school that you were spending the weekend with us) is starstruck, smarmy with love for you and my 10 year old son thinks you sing okay.

Thank you for your kindness and especially for calling. As the man who led Sam back out to meet us said, "He's a star now." You earned it.
Affectionately,
Courty

I think Denver sings better than ok. And he could really play the guitar. I wish he'd recorded an album by himself. Just his voice and his guitar the way Johnny Cash did. We might be remembering him in a different way now.
at 7:45 AM