40 Year Itch: Bowie Arrives in the US of A 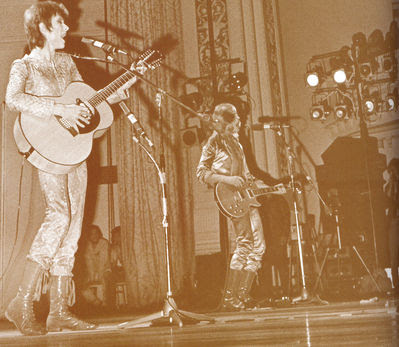 "When David Bowie made his Carnegie Hall debut last fall everybody from Albert Goldman to Andy Warhol was there plus a gaggle of weirdo's expecting some kind of a British Alice Cooper. That's not what they got. The concert opened as Bowie, in clockwork orange hair, came onstage amid flashing strobe lights, to the Mooged up strains of Beethoven's Ninth. From there, except for a simulated sex act with silver haired guitarist Mick Ronson, it was a matter of music, ranging from hard rock laid down by Bowie's band, the Spiders From Mars, to a Jacques Brel song with guitar accompaniment..." - Playboy (1973)

David Bowie arrived in America on September 27, 1972. That's the night he played a sold out show at Carnegie Hall in front of Andy Warhol, Tony Perkins, Truman Capote, Alan Bates, Todd Rundgren, The New York Dolls, men who spray painted their faces silver and women with see through clothes. 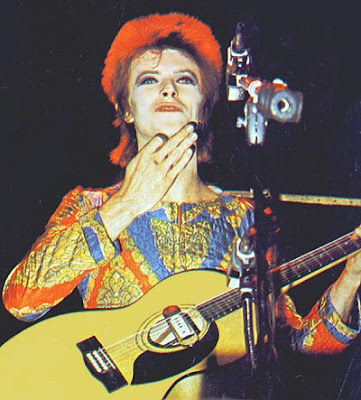 "Sound. Its swells like the booming of surf on a deserted shore. Ziggy and the Spiders. And there's Ronno, on his knees in front of the idol whose fame Bowie covets. The sexual movements are explicit and everybody is happy because it is happening just as it was reported by NME. Carnegie Hall is for a moment Wolverhampton. You can't fault the music. Or the group. They play hard, muscular chords, sharp and choppy, the tempo a futuristic quick-step that induces the adrenaline to flow. And Bowie as Ziggy cries to the crowd, head back, sweat running in glistening rivulets down the creases of his thin neck, staining his uniform. Put Your Space Face Close To Mine, Luv. Ronno rips off the chords. It's the first Bowie show with real power..." - Eric Van Lustbader (1976)

Bowie performed for 90 minutes. The set list consisted of songs mostly culled from Ziggy Stadust. But Bowie also performed "Andy Warhol" from 1971's Hunky Dory and covers of the Velvet Underground's "Waiting For The Man" and "White Light/White Heat" which he introduced with the line "This is like bringing coals to Newcastle". A month earlier Bowie and guitarist Mick Ronson had been producing Lou Reed's break through album Transformer. There was also a cover of Jacques Brel's "My Death" which was recorded and later appeared on RarestOneBowie in 1995.
The entire Setlist:
"Hang Onto Yourself"
"Lady Stardust"
"Moonage Daydream"
"Five Years"
"Suffragette City"
"Changes"
"Life on Mars?"
"Queen Bitch"
"Starman"
"Andy Warhol"
"My Death"
"Space Oddity"
"Width of A Circle"
"Waiting for the Man"
"White Light - White Heat"
"Round and Round"

Bowie had the flu that night and retired to his room instead of hosting an after concert party.
at 2:00 AM