40 Year Itch: A Message Floating In The Air 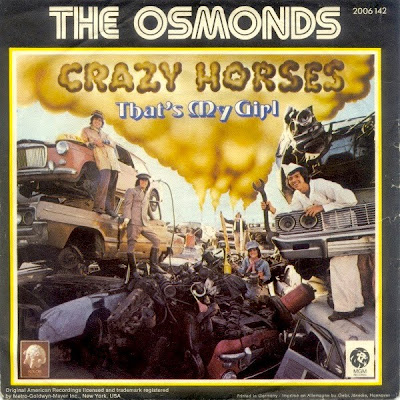 Yes, this is exactly what we were expecting from the Osmonds when they finally got to write their own songs and play their own instruments on their fourth album Crazy Horses, released in September of 1972. The same month The Osmonds cartoon debuted on ABC Saturday mornings.


Turns out Merrill Osmond liked to get the Led out. He's the main singer on this cut while teen idol Donny is content with making the horse neighing sounds on his synth.

Say what you will, the single "Crazy Horses" topped the charts in Holland and France and went Top 20 in the US and UK. And about that "message floating in the air": The Osmonds say the song is about auto pollution. Very topical. 1972 is the year government mandated the use of catalytic converters and proposed new cars reduce hydrocarbons by 35% and carbon monoxide by 20%.

Merill says during a French concert in front of a heavy metal crowd the band vamped "Crazy Horse" for half an hour. That probably would have impressed the Black Sabbath fans more... if it weren't for the pimped out jumpsuits.