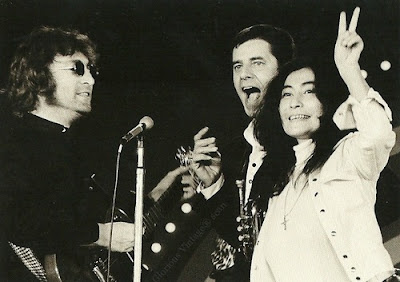 On September 4, 1972 John and Yoko performed "Imagine" and a reggae-ish version of "Give Peace A Chance" on the Jerry Lewis telethon. One YouTube commentator claims Jerry Lewis joined the band during the latter and played his trumpet so loudly and so badly John and Yoko left before the song was over.

After the performances, when it became clear John and Yoko weren't going to return despite chants from the crowd and Jerry playing his trumpet again, Jerry got serious for a moment:

I would suspect that John Lennon is probably one of the wisest showmen I've ever met. He knows what he's doing. He did two things tonight. He came here to help -one- I think this was the primary purpose of his visit. And two, he meant to say something. I think he did both those things. He has split. Let's thank him very much


The next day The London Art Spectrum showcased five avant garde films by John and Yoko: Cold Turkey, The Ballad of John and Yoko, Give Peace A Chance, Instant Karma and Up Your Legs Forever, a portion of which can be seen below