Considered a return to form after the slickly produced, slide-guitar free Streetlights,  Bonnie Raitt's fifth album Home Plate was produced by Paul Rothchild ( The Doors, Janis Joplin's Pearl) and recorded in Los Angeles with songs by Allen Toussaint and J D Souther and guest singers Jackson Browne, Emmylou Harris, Souther and Terry Reid.
Coming months after Linda Ronstadt made tequila-fueled country-rock and blues popular, everyone involved in the project was convinced this would be the bluesy 25 year old's breakthrough album. It does have that feel good West Coast polish.

"It combines all the good things on the first albums-like the group feeling, everybody putting in input, a producer taking some of the load off of me, providing a structure within which I can be funky, with a band that's professional, so we got the songs sometimes in three takes instead of twenty, because we'd be prepared," says Raitt quoted in Mark Bego's Bonnie Raitt: Still in the Nick of Time. "And I also think this is the first one where my voices is out, recorded better. It isn't necessarily true that I'll never do any old acoustic blues or play guitar, but it represents a time capsule of one particular change that I went through, and I think it's a change for the better."

By her thoughtful phrasing and gentle-to-gritty timbre, by her understated dramatic presence, by the songs she chooses to sing, Raitt makes her "compassion" seem unsentimental and even sharp-tongued without any loss of outreach. I love every cut, from John and Johanna Hall's "Good Enough," her most alluring analysis of a long-term sexual relationship yet, to John David Souther's "Run Like a Thief," which is about going to bed with your best friend's mate.

For me the two highlights are the Toussaint penned "What So You Want The Boy To Do" and the funky concert fave "Sugar Mama", written by Delbert McClinton's musical partner Glen Clark. Here, Raitt brings back her bottleneck guitar playing to the fore.
Home Plate would be her best selling album to date, peaking at #43 on the Billboard album charts. No artists has been more poorly served by her album covers than Bonnie Raitt so don't judge Home Plate by its cover. 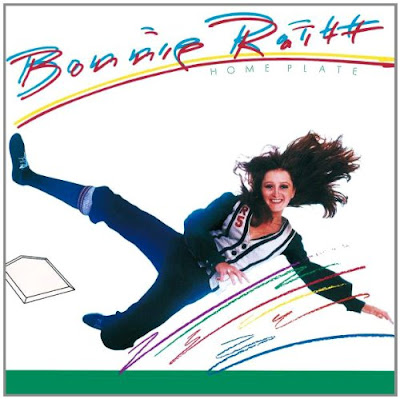