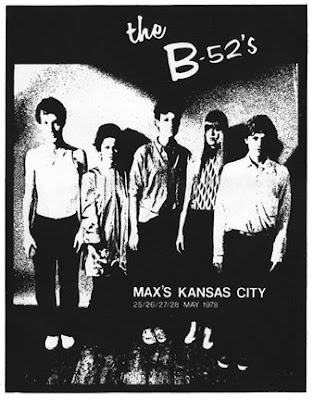 On September 2, 1978 The B-52's played the The Downtown Cafe in Atlanta. This was clearly a band to be reckoned with, as Chris Stamey noted in his memoir A Spy in the House of Loud:

The B-52’s seemed to play the Mudd Club every month or so in 1978. Their fast-paced, infectious tune, an example of what would have been called a novelty record back in the fifties, framed absurdist recitatives of aquatic scenarios with Farfisa organ lines, surf guitar figures, Theremin-like vocalese reminiscent of Yoko Ono, and . . . no bass guitar at all.

The setlist that evening included 52 Girls, Hero Worship, the Petula Clark cover Downtown, Dance This Mess Around and Rock Lobster, which would all appear on the 1979 debut, recorded in the Bahamas in early '79.

They even played Devil in My Car, which would kick of Side Two of 1980's Wild Planet.