Hikin' Up Their Chinos 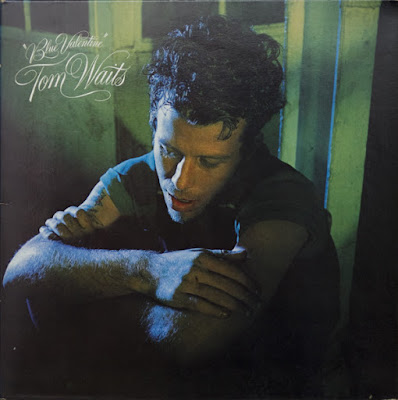 “I’m really getting a little tired of being referred to as Wino Man. It was okay for a while, but I’d like to be a little more three-dimensional.” -Tom Waits


In  September of 1978, Tom Waits released Blue Valentine, his fifth studio album and best since The Heart of Saturday Night. This is the last of the jazzy hep cat albums before Waits launches into the 1980's with a new, brasher rock n roll racket.

Tom Waits tells the same stories all the time — the small-time gangster who gets blown away by the big boys, the tough whore who sleeps with a torn-up teddy bear under her pillow, the barely employed sucker who spends his spare time and puny paycheck at the local saloon — but he makes each one sound different. That’s why he’s a great storyteller...

...Would that Waits’ music were that resourceful. His melodies tend toward standard bluesy riffs and endless piano vamps, while his singing is sometimes reduced to a mere gurgle of phlegm in the back of his throat. Yet the deterioration of his voice and the lugubriousness of his tunes aren’t anything new. True, they make the album hard to listen to, but sometimes you can tune out the voice and you can always stick with the lyric sheet.

From Robert Christgau a nod to the opening track, "Somewhere ( from West Side Story)".

Waits keeps getting weirder and good for him. As sheer sendup, his "Somewhere" beats Sid Vicious's "My Way" his way. But I'm not always sure he understands his gift--these lyrics should be funnier. And "Romeo Is Bleeding," easily my favorite among his Chandleroid sagas of tragedy outside the law, is more effective on the jacket than when he underlines its emotional resonance in song. That's not weird at all.