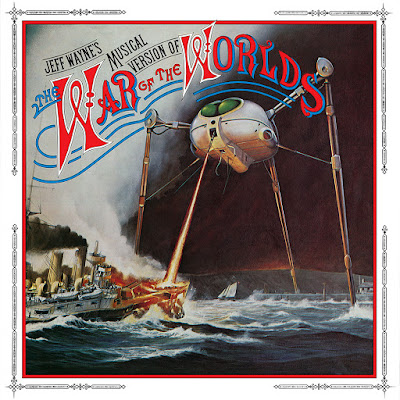 Jeff Wayne : The Eve of the War

On September 6, 1978 jingle writer Jeff Wayne released his adaptation of H.G. Wells's War of the Worlds, a two disc set, years in the making,  that would sell millions of copies around planet Earth, inspiring tours, video games, dance performances and sequels,  all while being virtually ignored in the United States.

Such perfect timing! Only in a year when disco and Meatloaf shared the musical charts could something this bombastic have been such a success. Richard Burton narrates while Chris Spedding, Herbie Flowers (bassist on Lou Reed's "Walk on the Wild Side") , David Essex, Thin Lizzy's Phil Lynott, Julie Covington and Moody Blue Justin Hayward perform. Hayward's "Forever Autumn" peaked at U.K.#5.

This remains some people's favoritevrock opera  album of all time as well as one of those CDs one uses to measure the quality of a sound system. Now available in 5.1.  Still, 40 years later, nobody really knows what the alien is trying to say when he screams "Uuuuullllaaaahhhhhh!!!"