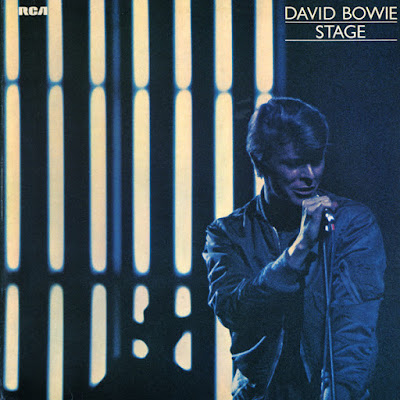 On September 8, 1978 David Bowie released Stage, his second live album. Apparently a contractual obligation, the album comes just 4 years after the uninspired David Live. This one is better. Stage documents the Isolar II tour and consists of new songs from his Berlin albums Low and Heroes as well as some crowd pleasers from his earlier career. Curiously,  the album was rearranged so songs appeared in chronological order instead of the way they were presented in concert.

So you will hear "Art Decade" and "Breaking Glass", "TVC-15" and "Station to Station", with some innovative lead guitar by Adrian Belew. What you won't hear is much in the way of audience noise. They were mixed down, giving the album a sterile feel. The last thing you might want from a live album.


From Robert Christgau, who gave the album a B+ score:

If James Brown is the only rock and roller who deserves more than one concert album, then the Bowie to ban is David Live. Stage kicks off with some well-chosen Bowie oldies before moving into refreshingly one-dimensional versions of his best songs since 1975, including the key Eno collaborations, which were often oversubtle to begin with. For fans only, of course. I'm one.


Though Stage was obviously put together for purely commercial reasons — to regain for the Thin White Duke the audience he’s lost since becoming the Thin White Computer — it’s a curiously uncompromising album. With the exception of the furiously energetic “Hang On to Yourself,” the Ziggy Stardust songs designed to suck in the dollars are given dispassionate, let’s-get-this-over-with treatment. “Fame,” another popular number, is attractive and glossy, but doesn’t add anything to the original.

Paradoxically, it’s on the electronic cuts from Low and “Heroes,” and on the title track from Station to Station, that David Bowie really delivers — and more warmly than he ever has on record. Live, the new material comes clearly into focus: it’s as if the built-in drama of concert presentation has given these songs the added dimensions they needed. The long instrumental, “Warszawa,” boasts an icy magnificence, and “Speed of Life” bounces along as merrily as some imagined, futuristic Pepsi-Cola jingle. The whole of side four (“‘Heroes,'” “What in the World,” “Blackout,” “Beauty and the Beast”) is almost perfect, as Bowie plays — and plays with — the role of a Sinatra-like romantic crooner. There’s also a raucous, very funny version of “TVC 15,” with singer and band trading yodels like mad mountaineers on a binge.


Shelving his recent “I’m just an average bloke with a synthesizer in me pocket” pose, Bowie here presents himself as a superbly professional entertainer — and one whose graceful clarity is a welcome antidote to the messy hash of 1974’s David Live. Whether he’ll be able to merge this stance with the avant-garde experimentalism of his current music is still uncertain. But I can’t think of another performer with sufficient bravery to challenge a rock audience to sit still long enough to watch him try.
at 2:00 AM