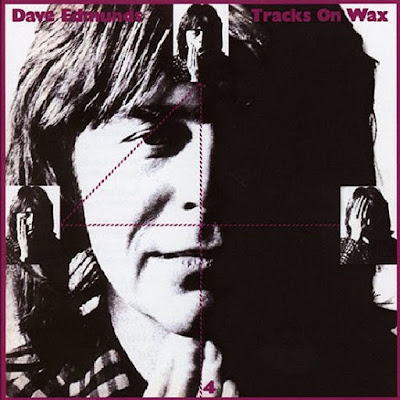 On September 8, 1978 Dave Edmunds released Tracks on Wax, an album that reunites Edmunds and Nick Lowe who had, together, recorded Get It  in 1977. With guitarist Billy Bremner (who contributed "Trouble Boys" and the slightly skeezy "Not a Woman, Not a Child") and drummer Terry Williams, they formed Rockpile, one of the best studio and live bands of the era.

In fact, Tracks on Wax is their first full album together. (They played together on some of Lowe's Jesus of Cool). You have really nice moments like Lowe and Edmunds harmonizing Everly brothers-style on their co-write "Deborah". Lowe also contributes "Never Been in Love" and the band revisits his "Heart of the City".


The reason it's a Dave Edmunds solo album is because Edmunds and Lowe were signed to different labels. Edmunds was with Swan Song and Lowe with Columbia. Rockpile would also play on Lowe's Labour of Love, and Edmunds' Repeat When Necessary as well as albums by Carlene Carter and Mickey Jupp. Finally, in 1980, Rockpile would release its only studio album, Seconds of Pleasure.

Robert Christgau gave the album an A minus rating:

Edmunds has evolved from a one-man session (he played everything but bass on his solo debut) to the spirit of Rockpile, the hardest-driving traditional rock band in the world: Edmunds and Billy Bremner on guitar, coleader Nick Lowe on bass, and the indefatigable Terry Williams on drums. Live, everyone but Williams trades vocals, but this is Edmunds showcase, and he does it proud. On Get It, which featured the same musicians on some tracks, his studiousness weakened great material, but this time he sings up to the main force of a band and proves all those clichés about getting that feeling together on the road. Here to stay